Skip to main content
March 21, 2019
42. The meaning of life? Or the number of garden implements that I will collect from the shed in order to complete any one task? You decide. I don’t garden like other people. Or do anything like other people for that matter. I imagine most folk garden in a neat and orderly fashion, following the order of business at the allotment, mowing the lawn before it gets too hot, replacing the flowers every year… I don’t have a lawn, I have a dandelion farm (mesclun is actually a component of salad). I planted flowers a few years ago and promptly forgot about them. Which was a very pleasant surprise when the tulips still reappeared after their first year. My shed has a hole in the roof and may or may not be home to a wasp colony. My patio has a giant hole in it, seven pallets and more ‘I’ll do something with that one day’ than my neighbours would like. Especially since I have never actually got around to putting up a fence. Which does not stop me from complaining when the random neighbours that I never see use my patio to smoke on. 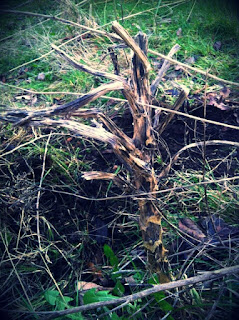 To illustrate my lack of gardening nous, please bear witness to the unfortunate remains of the purple sprouting broccoli as shown in the photo to the left. Patio Larry he was called. He was called this because well, he grew in the patio. More specifically, in Sand House, Crack Lane, Cement Slab Town. Me being the sort of gardener that sees the veg growing but fails to make the connection between growing veg and eating veg, left it there. Mostly to see what would happen. Patio Larry soon turned into a bush of pretty yellow flowers and soon Patio Larry had a couple of illegitimate children floating about. Also in the patio. Patio Larry was the result of my first love affair with gardening, his children came along as I lost interest and then the love affair began all over again as the gardener (me) discovered permaculture i.e. A New Experiment. So it was off with his head for poor Larry as he became more useful as compost material. Except he didn’t. Larry survived his removal from the patio where he was born and lived one more glorious season as a giant bush of broccoli. None of which got eaten. I can’t quite recall how Larry met his demise in the end, it was either the winter of many rains or me cutting bits off him to try and make a fence of broccoli. Which was about as successful as you would imagine. Day 1 in the garden ended after the obtaining of the incinerator and some dismantling of Mighty the hugelkultur which led to the discovery of some baby (very baby) potatoes. I am not entirely certain how they got there as I do not remember planting them. This discovery was also tempered by the fact that I had just bought two bags of baby potatoes. Fuelled by justified rage at the dumbassery of other people (not in anyway connected to the garden), I managed a good shift of one part of the garden to a different part of the garden. I may wake up tomorrow as the hunchback of notre dame but I will have taken my anger out appropriately (mostly) and will be well on my way to having the biceps of Popeye.

March 19, 2019
I have nobody to blame but myself. Some time in the last two or three years I have become The Neighbour From Hell, the Steptoe of the Street, the Chief Procrastinator of Hoarderville. Of course there are reasons, there always are. Too much work, too noisy a brain… The usual. It was always somewhat unkempt around the edges but a perfectly functional garden nonetheless. If I’m honest I never actually ate any of those vegetables, this was more gardening for experimental purposes. Yes I know that is a terrible waste. See picture number one for evidence as to the type of person I currently am. I’m fairly sure I look a bit like it in person as well. My garden and I have a complicated relationship. I know what I want it to do, in theory, and in reality I do nothing. I have enough land to produce food for myself and enough time (again, in theory less than reality) to turn my garden into something functional and pretty. Which is what I want. I think. My brain sometimes can’t hear itself
Post a comment
Read more