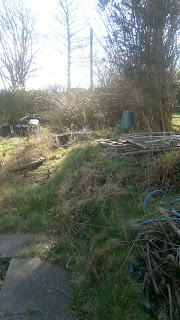 I have nobody to blame but myself. Some time in the last two or three years I have become The Neighbour From Hell, the Steptoe of the Street, the Chief Procrastinator of Hoarderville. Of course there are reasons, there always are. Too much work, too noisy a brain… The usual. It was always somewhat unkempt around the edges but a perfectly functional garden nonetheless.

If I’m honest I never actually ate any of those vegetables, this was more gardening for experimental purposes. Yes I know that is a terrible waste. See picture number one for evidence as to the type of person I currently am. I’m fairly sure I look a bit like it in person as well. My garden and I have a complicated relationship. I know what I want it to do, in theory, and in reality I do nothing. I have enough land to produce food for myself and enough time (again, in theory less than reality) to turn my garden into something functional and pretty. Which is what I want. I think. My brain sometimes can’t hear itself over the noise it’s making. At this point, it’s not so much gardening as self flagellation. Which is good. Hopefully the effort of clearing up the mess I’ve made will discourage me from ever producing it again. My first step is obtaining a garden incinerator bin. It would take me weeks of filling the brown bin to get rid of it all and it’s already mid March. Although we did have snow last week. I tell a lie, my real first step was going outside and attempting to clear the remains of the garden netting from the top of Mighty (the big hugelkultur bed) but getting distracted 7 times in the process. My next step was then attempting to prune the tree in the very corner back to the point where it wasn’t shoving itself into my mouth at any given moment. Followed by much discouragement and realising I needed to go and make lunch. I have subsequently returned to my ‘outdoor room’ and made a good start at hacking away some of the undergrowth all the while not daring to hope that my shift at work tonight would be cancelled so that I could continue to suffer enjoy the fresh air. Amongst the leaves, stubborn grass and muck I found a plastic bag, crisp packet, two lighters still in the packet and yet another baby wipe which is mysterious as my neighbours don’t have children. I also tormented myself by foolishly trying to pull up the evil fencing plant of doom that has insinuated itself in the lawn. For some reason it doesn’t seem to occur to my brain that the plant that has glove defying spikes in it will continue to have glove defying spikes in it each and every time. Shift at work duly cancelled, I am now off to obtain numerous stares on the bus by lugging home an incinerator bin. I pretend that it is the practical option when really the truth of the matter is that I enjoy a good act of wanton destruction, hence the tree pruning entree.